I'm interested in making a high accuracy real time clock (RTC). To experiment with the hardware I need for that, I created a development board based on the STM32F030F4P6 (which is a 20-TSSOP package) and a TCXO.

I chose that STM32 for two reasons: one, because it's cheap I can buy extras in case I screw things up. Two, it's a small package that I find easy to work with. My overall goal was to keep the costs under $10/board. They ended up costing $7.02/board.

It doesn't have a crystal so I added that. The resulting schematic ended up being: 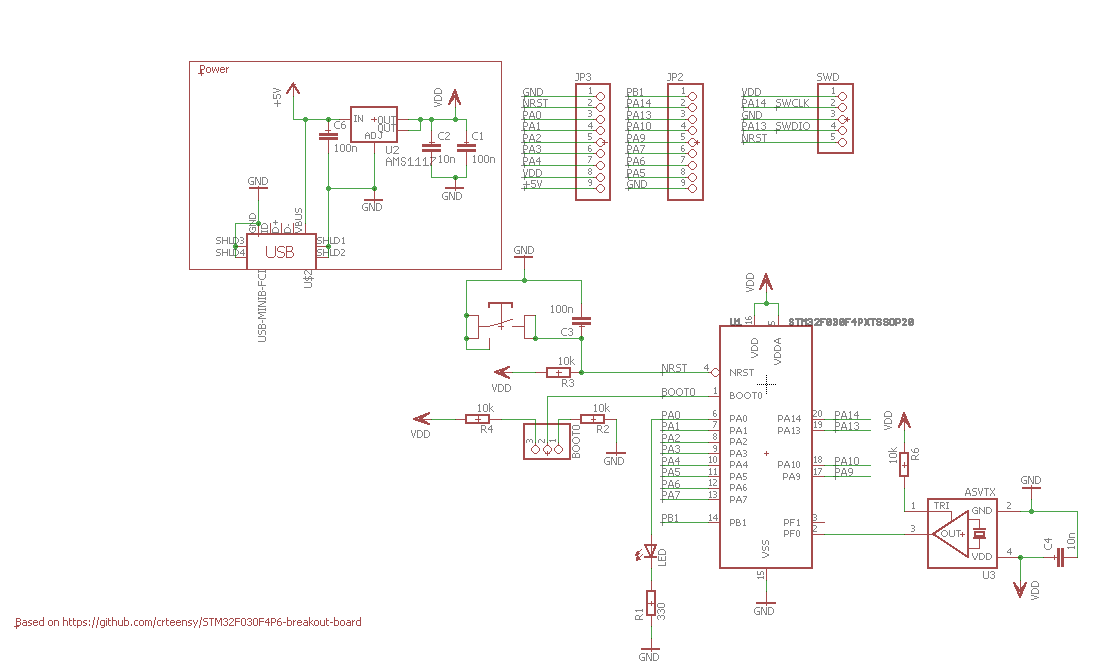 I had originally chosen the wrong TCXO, an ASVTX-11 which has a 0.8V peak to peak output. Thankfully, Abracon has models with the same pads with a HCMOS output. I ended up using an ASTX-H11. The ASTX-H11's output is a full 3.3V peak to peak, which works for me. 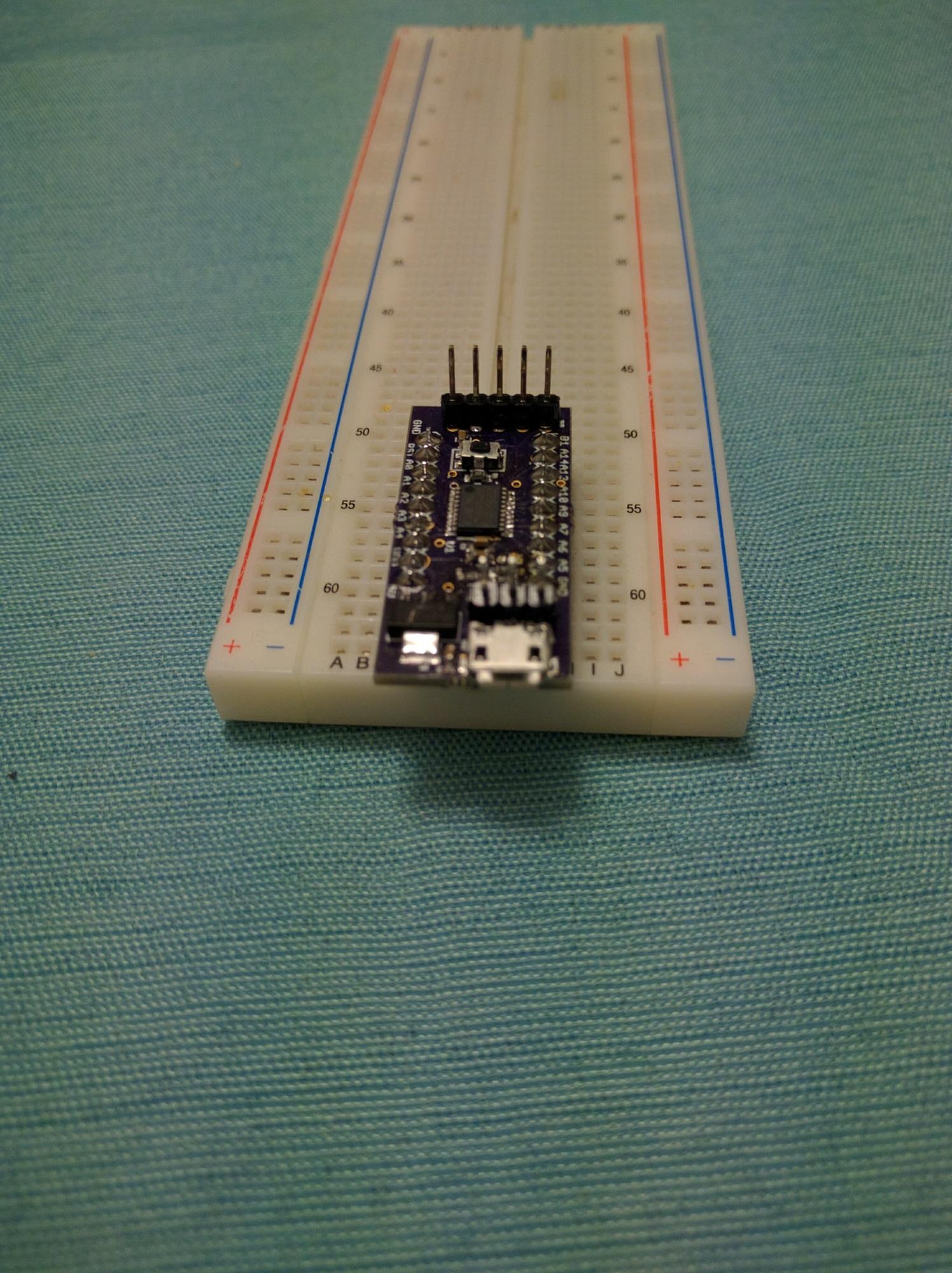 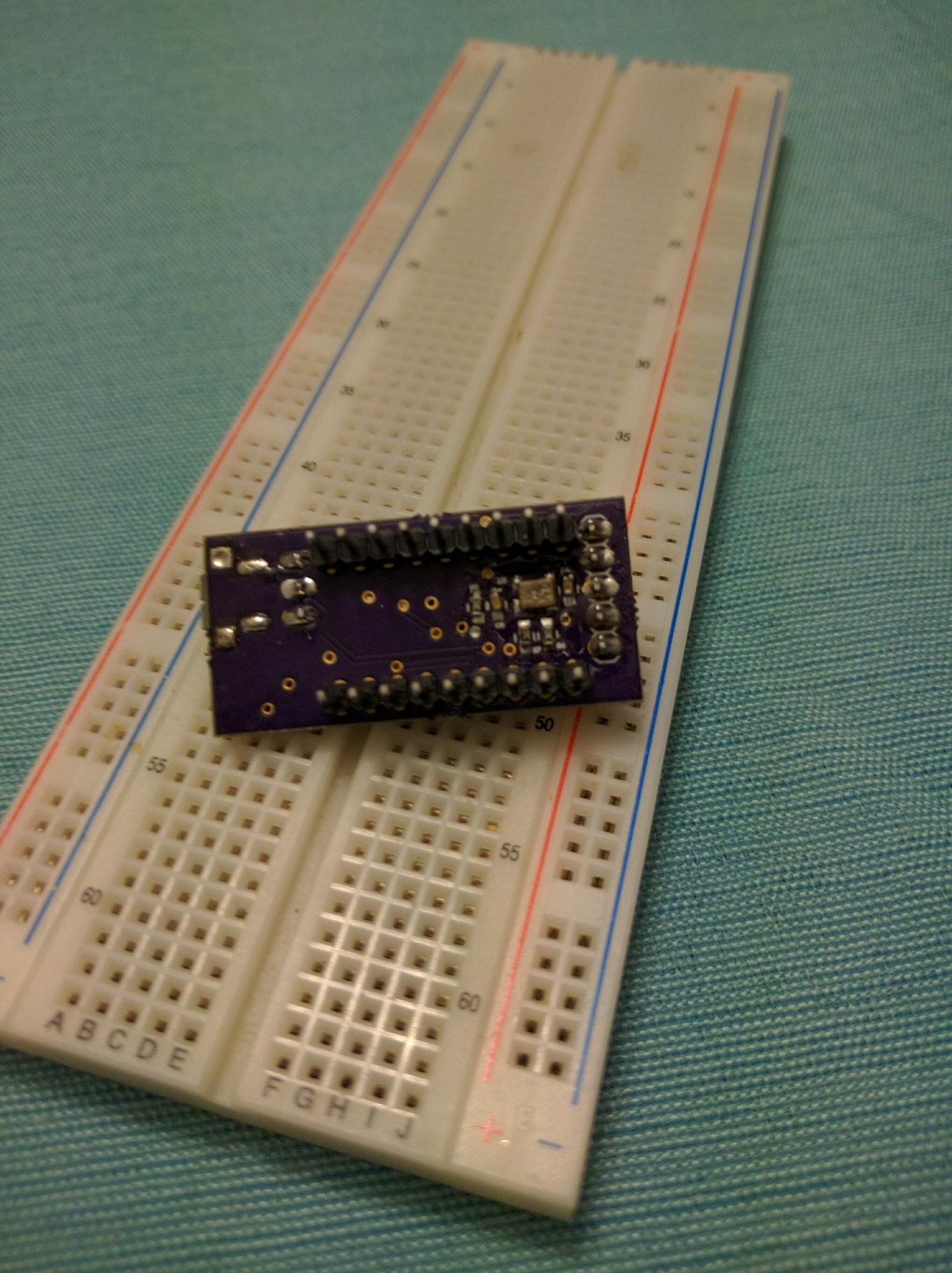 I had never soldered 0603 parts before, and they were challenging. I'm much more comfortable with larger parts.

I setup a simple LED test to verify all the microcontroller pins were connected. After fixing a few pins, all LEDs were blinking. 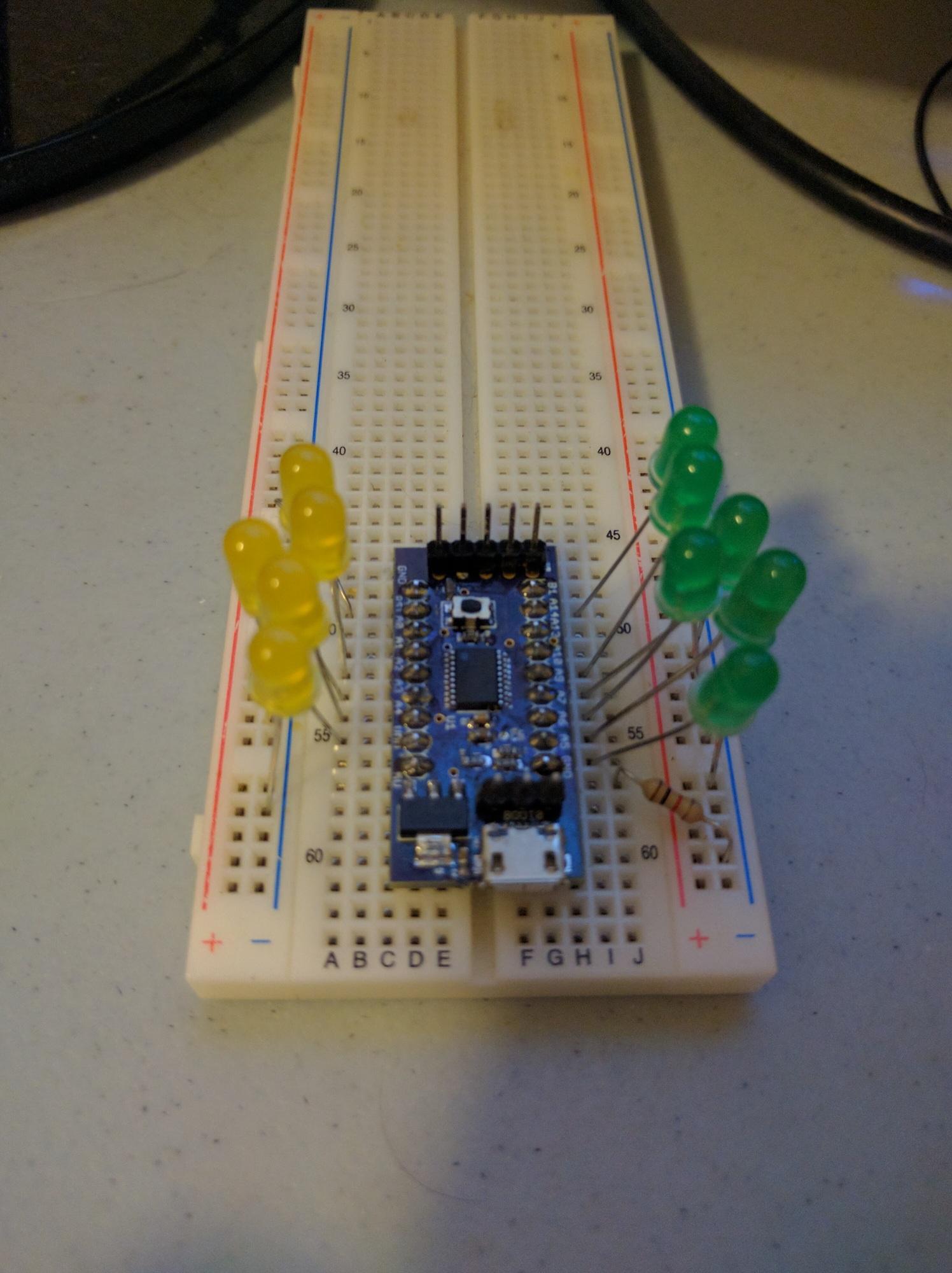 There's a space on the board for a SMD LED, but the Eagle part I used must be bad because the solder mask is covering the pads for the LED.

Next test is to connect a GPS PPS to an input capture pin and measure the frequency of the TCXO.

I used stm32CubeMX to setup the pins, and my code looks like this:

This gives me two timestamps per GPS PPS: one in milliseconds from the systick timer (HAL_GetTick) and one in 48MHz cycles from timer TIM3. TIM3 is only 16 bit, so it wraps over 732 times per second. So I'm using the millisecond count to figure out how exactly how many times TIM3 wrapped. Using both together, I have a measurement precision of 20.8 nanoseconds. The serial output looks like this:

From that, you can see that each PPS is exactly 1000 milliseconds apart (which is what I was expecting, so that's good).

This is the math I used to measure exactly how many clock cycles happened between the first two PPSes:

To verify that number, I can use the millisecond counter:

Applying this to roughly 3 days worth of data: 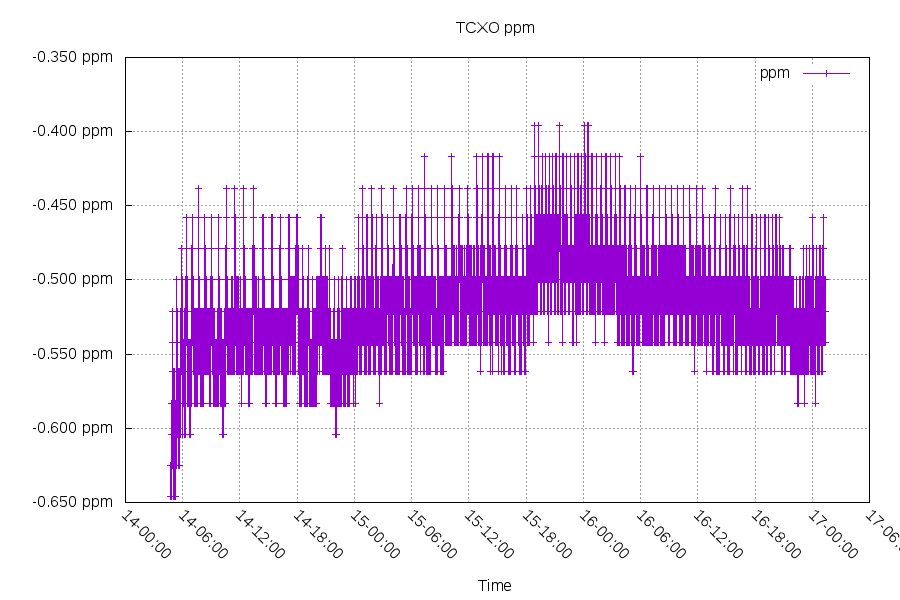 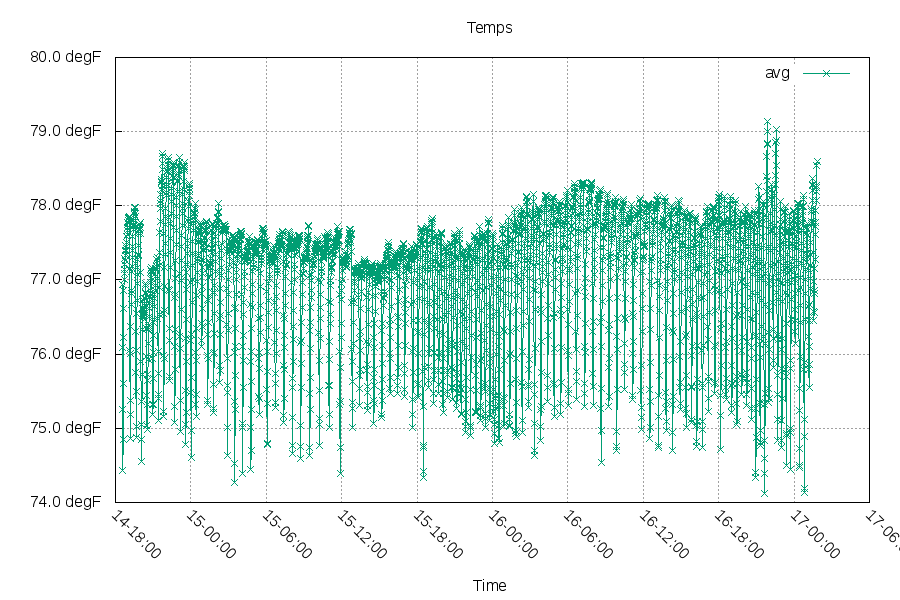 So if I apply a +0.520ppm adjustment (+25 clock cycles per second), the time offset of this RTC looks like this: 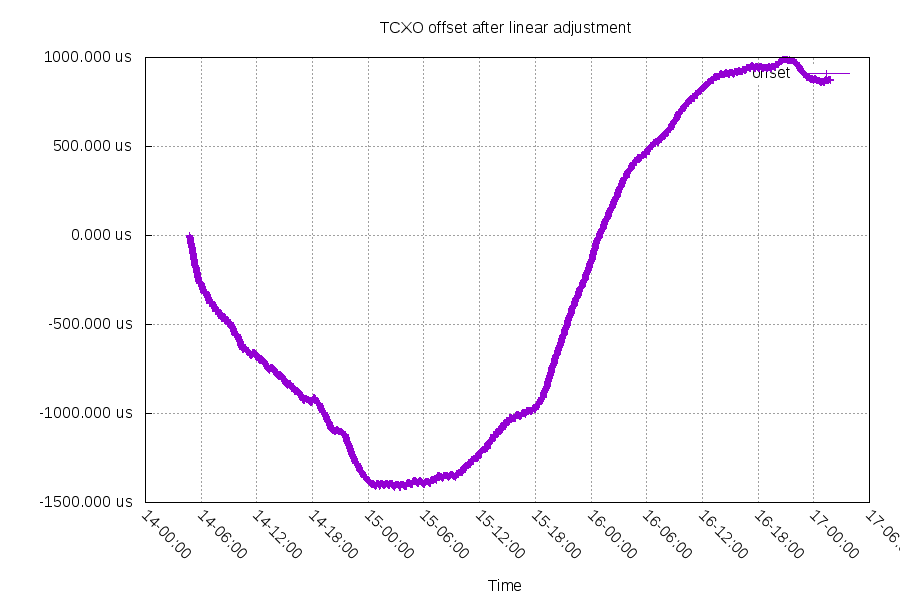 This is roughly 1ms/6 hours at the quickest change, which is 0.046ppm. My use for this RTC doesn't involve a GPS time source, so it will probably be worse as it ages and otherwise drifts. But it's still pretty good.

My next steps for this project is to generate a PPS and create an I2C interface for a Raspberry PI or other SBC to talk to.

Question: What happens to a GPS receiver's pulse per second (PPS) when it loses signal for a long time? To answer this, I first moved the antenna away from the window and put