I noticed the GNUK project had support for the STM32 Blue Pill. I've been looking for an open source hardware key storage for GPG/SSH keys, so I tried it out. 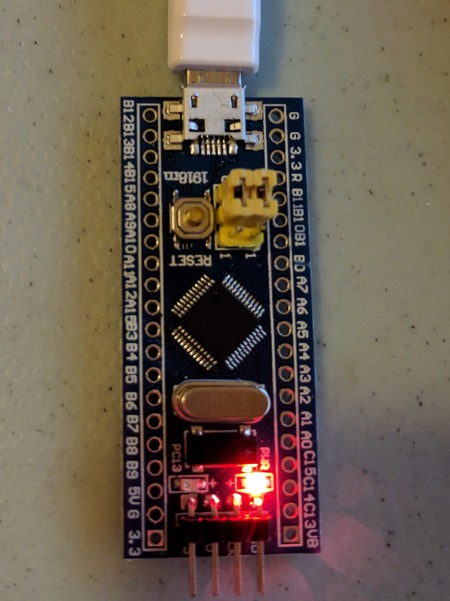 GNUK supports the OpenPGP smartcard protocol, and has space for 3 keys. The keys are named: "Signature key", "Encryption key", and "Authentication key". There's a few places that sell the hardware+software as a keyfob solution: FST-01, and Nitrokey Start.

These are the flags I used to configure. Note that the vid+pid I used are available only for private testing.

To flash the new binary to the Blue Pill, I used ST's ST-Link utility and ST-LINK/V2-1 hardware. I already had an arm-none-eabi-gcc toolchain installed.

Using it under Linux

After that was done, my gpg-agent had a SSH agent socket, but my environment wasn't pointed at it.

After I changed the SSH_AUTH_SOCK environment variable, I could see the key:

Then all I needed to do was put that line into my .ssh/authorized_keys file.

Using it under Windows

Moving the USB device to my Windows machine, I followed these directions: GPG4WIN and Pageant. I also wanted to use cygwin ssh, so I also installed ssh-pageant from cygwin's packages.

After running gpg-connect-agent /bye (from GPG4WIN) and ssh-pageant, I had the key available in cygwin:

I had to import the public keys into GPG4WIN, and then run gpg2 --card-status to get it to associate the private keys on the stm32 with the public keys in gpg. Once I did that, the Kleopatra windows app let me sign and encrypt files.