I've been working on my high accuracy RTC project.

Here's a picture of one of the two systems:

The TCXO devboard, BME280, and PCF RTC are all on the i2c bus. The TMP36 sensor is hidden behind a wire in this picture and is connected to an analog input pin on the TCXO devboard.

The 50Hz PWM is divided down in software to 1Hz (PPS) and the timestamps for all three channels are exported from the TCXO devboard via I2C.

The data from the input capture is below. By random chance, everything is close together in frequency. The "GPS" channel is measuring the TCXO devboard's frequency. The other two channels are measured relative to the GPS channel (so the TCXO devboard's frequency error isn't added to the other channels). 64 seconds worth of samples (at 1 sample per second) are averaged together. Samples outside of +/-500ppm are thrown out (this happens when the GPS module loses lock and stops its PPS). 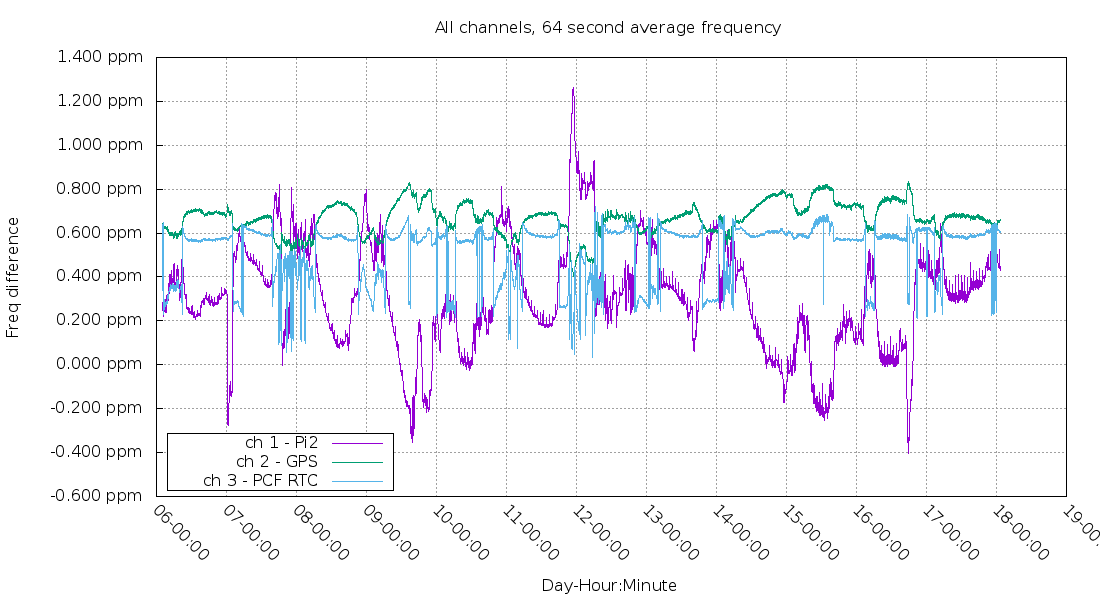 There is additional data on the PCF2129 RTC on another blog post.

NTP's control of the local clock

I'm going to take a moment to explain how ntpd/chronyd/etc keep the local clock in sync.

Like the ubiquitous PID controller, the various NTP servers measure the difference between where the local clock is now and where it should be (proportional term/phase lock loop) as well as the frequency of the local clock and what that should be (derivative term/frequency lock loop). I have not seen any NTP system that uses an integral term, because using the proportional+derivative terms is enough (steady state errors tend to be low relative to errors from jitter and wander).

ntpd and chrony have different ways of measuring and calculating the proportional and derivative terms as well as applying them, which I won't go into here.

PWM as a derivative term measurement

In order to measure the Pi2's clock frequency with the highest precision, my goal was to use the input capture timer hardware in the stm32 chip on the TCXO devboard. But that requires the Pi2 export its local clock in a way that isn't affected by CPU load. PWM hardware is perfect for this, as it runs off a timer in the Pi2 hardware. It's using the same local clock as the Pi2's system clock, and doesn't require the CPU to do anything after PWM is setup on boot. Because of the other system (which I'll cover in a different blog post) having a minimum PWM frequency of 50Hz, I've set the Pi2 to output 50Hz as well. C program to setup pi PWM

Output the derivative term into NTP

Once I've measured the Pi2's clock frequency, I can feed it back into NTP's local clock control. I'm using chrony's tempcomp feature for this. 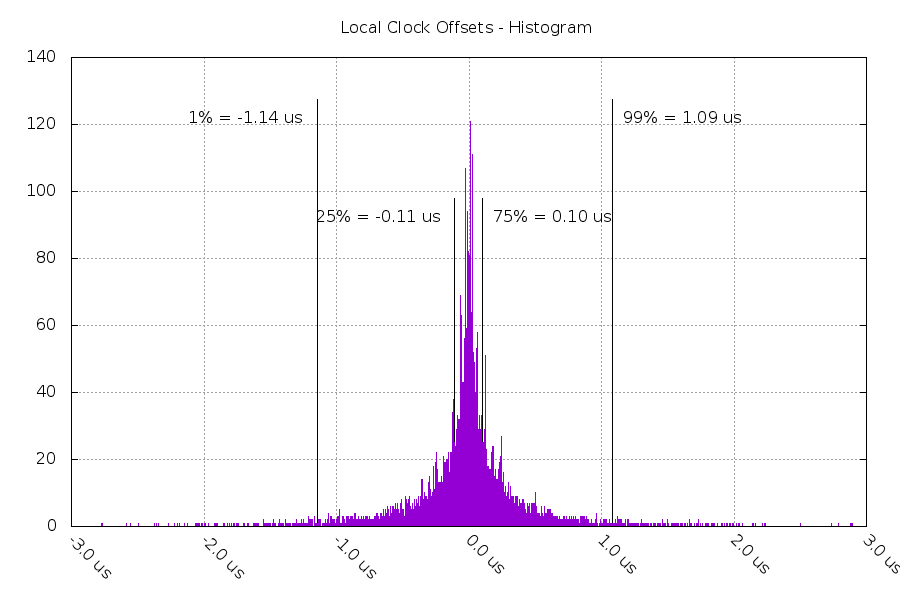 Compared to a system without this sync:

The code for this project is in github

Temperature effects are usually the largest source of frequency changes in clocks. So I have three temperature sensors on my test system [https://blog.dan.drown.org/frequency-synchronization-without-phase-in-ntp/]. The sensors are: one built

Real Time Clocks I bought two high accuracy RTC (real time clock) modules and wanted to compare them. RTCs are useful for very low power clocks. They can run for years off of

Dan's notes
—
Frequency synchronization without phase in NTP
Share this