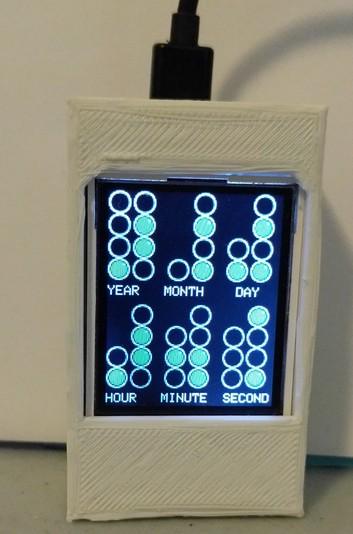 I've made some progress on my binary clock project

Here's a video of it in its new case: https://www.youtube.com/watch?v=VnHRYwOf2ZQ

I've been tweaking the clock controller code and experimenting with different setups to see how the code reacts.

For this test, I just let it run: 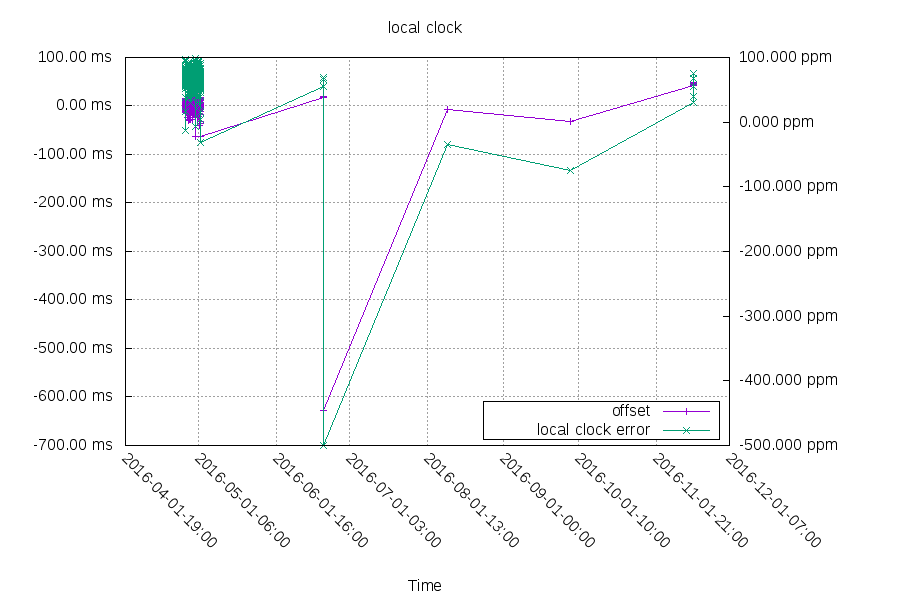 This test ran for almost 6 days. Unfortunatly, it hit a bug that caused the clock to jump by 2^32 milliseconds multiple times. The accidently adding 2^32 ms to the clock bug is fixed now. The offset isn't way off because it is stored as milliseconds in a 32 bit signed integer. This is a second bug which is hit if the original clock setting is off by months. I'm just going to work around the second bug by rebooting the esp8266 for now.

Next, I lowered the proportional constant in the PID controller, to see if it would result in better time. 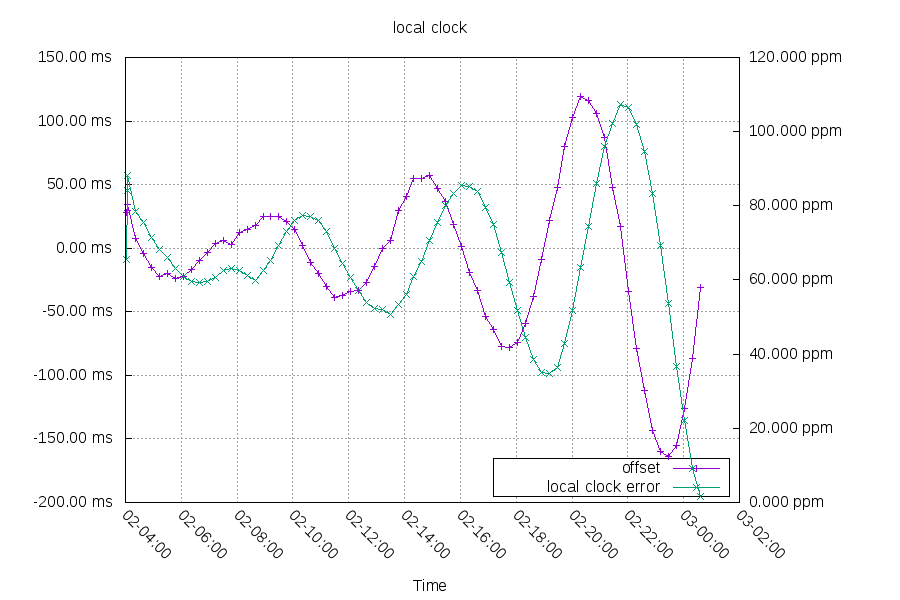 This lead to more instability. You can see the I term is now the one pushing the clock out of balance, and the P term's delayed reaction is adding to the problem: 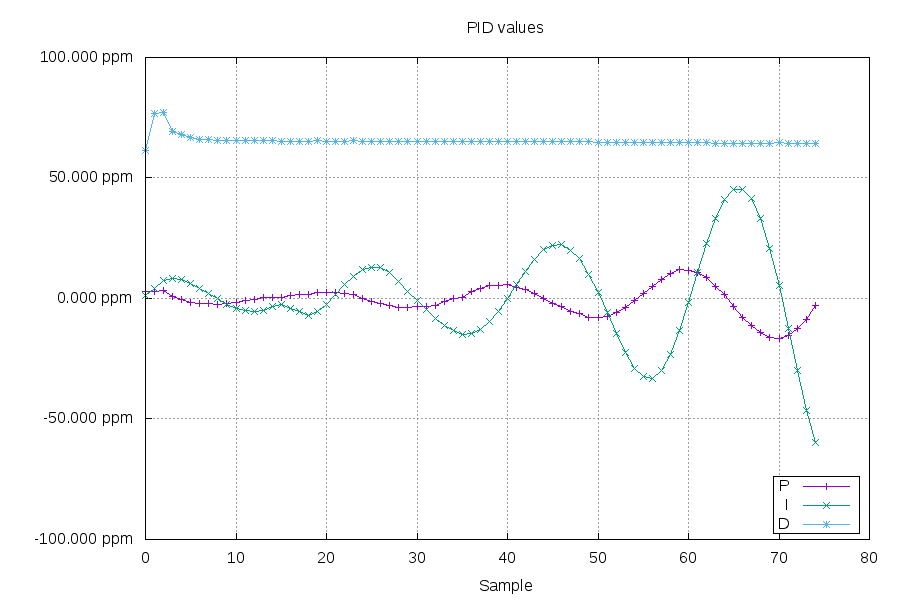 I reset the PID constants back to their original values and let it run again: 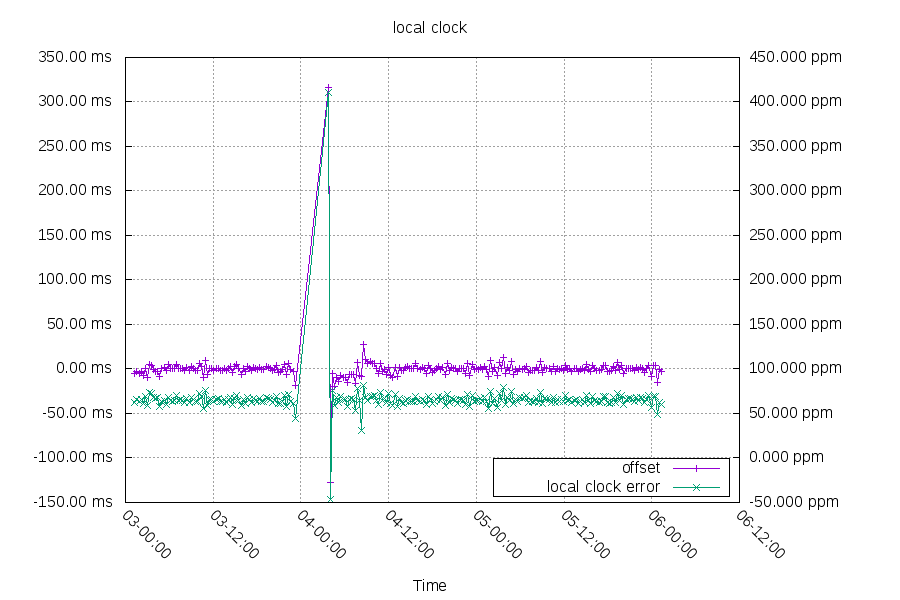 The sample before the packet loss left the P term set to 18 ppm slow: 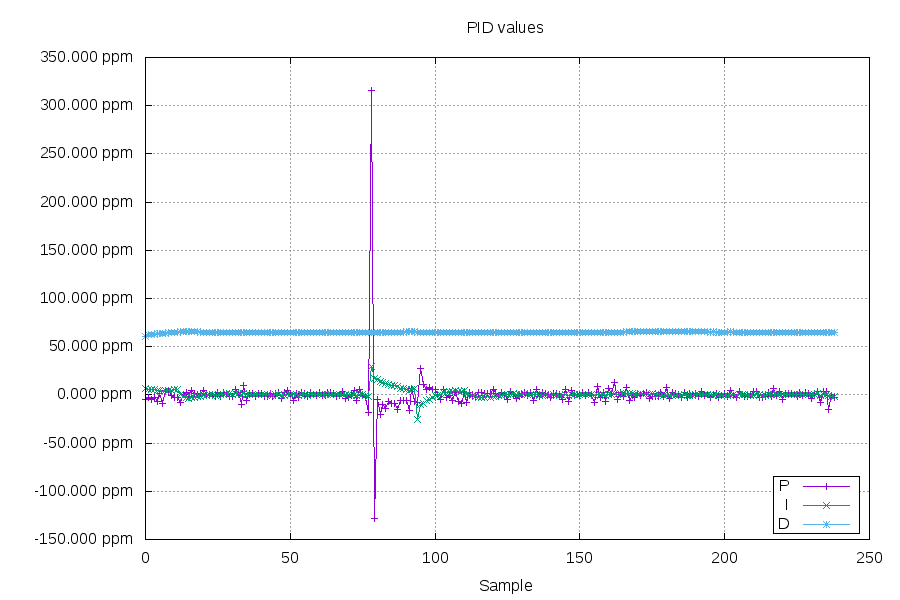 When the source came back 16,399,248 milliseconds later, the clock was 316ms slow. This is an error of 20.366ppm slow. If the clock had fallen back to just the D term on packetloss, it would have only been ~2ppm slow (around 32ms). This is because the P and I terms are unknown values while the D term is very stable (see below). I've adjusted the code to fall back to just the D value on packet loss. 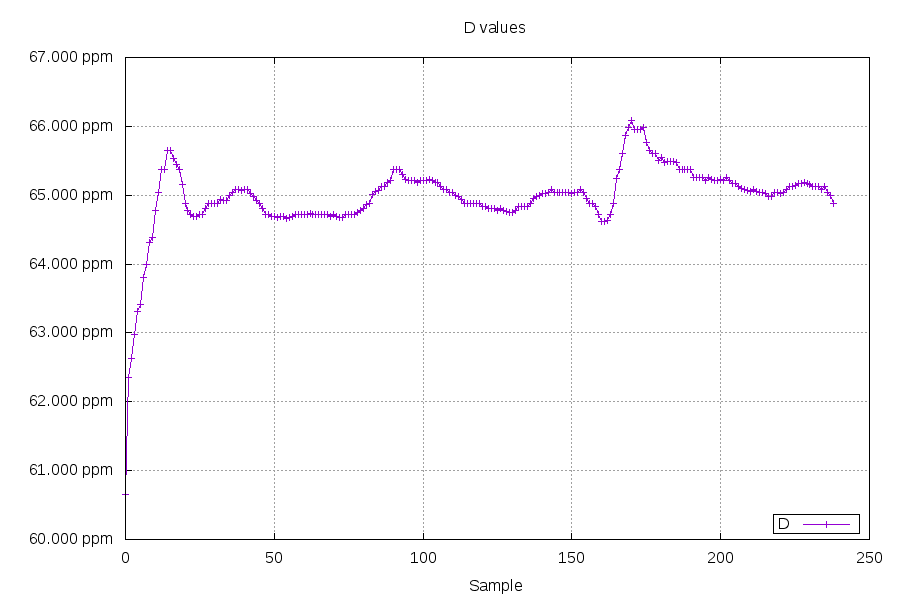 I am happy about how quickly the clock got back into sync after the packetloss. You can see there's some P+I offsets that quickly settle out.

The end result of offsets for this run: 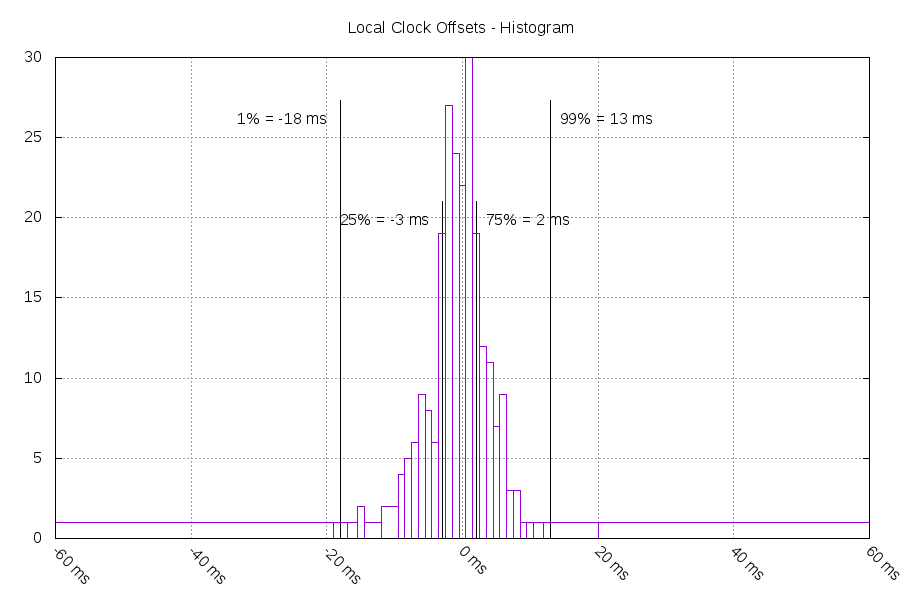 Next, I tried using a NTP server on the local network.

Comparing the round trip time to the two different NTP servers looked like this: 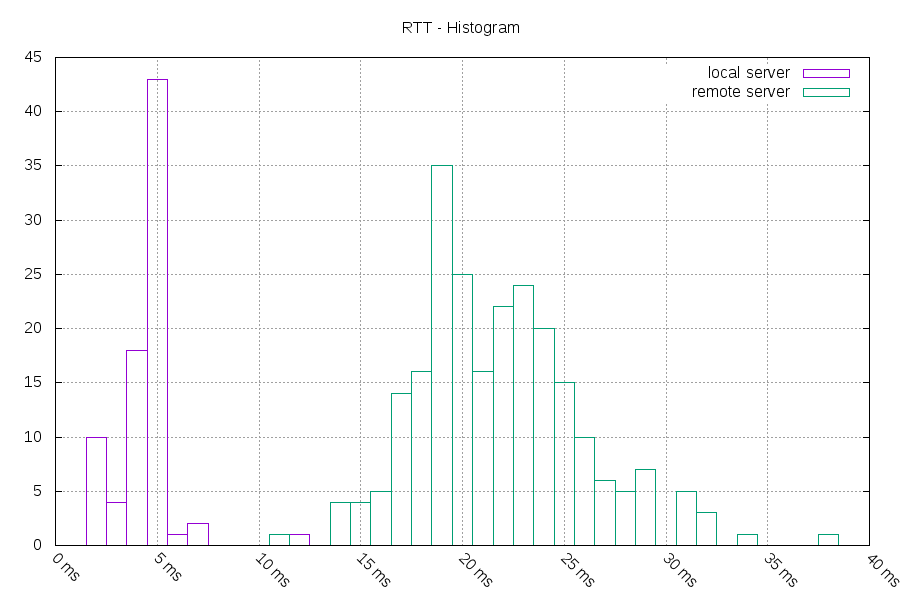 With the local server, 80% of the 79 round trip times were between 2ms and 5ms. This is 2ghz wifi, so that's not completely surprising. 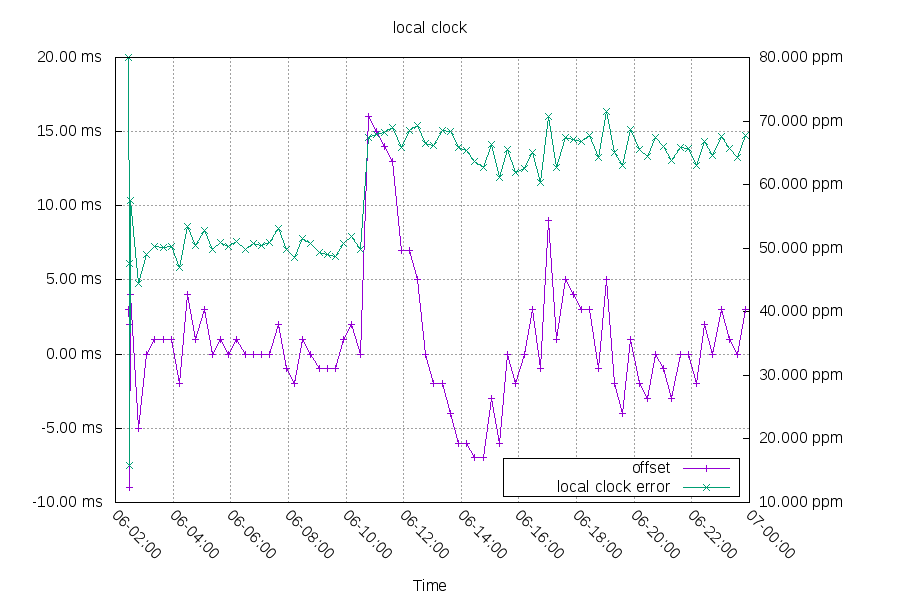 You can see first the offset driving P at sample 32, then I slowly catching up, and last D finds the new rate while P and I settle back down. 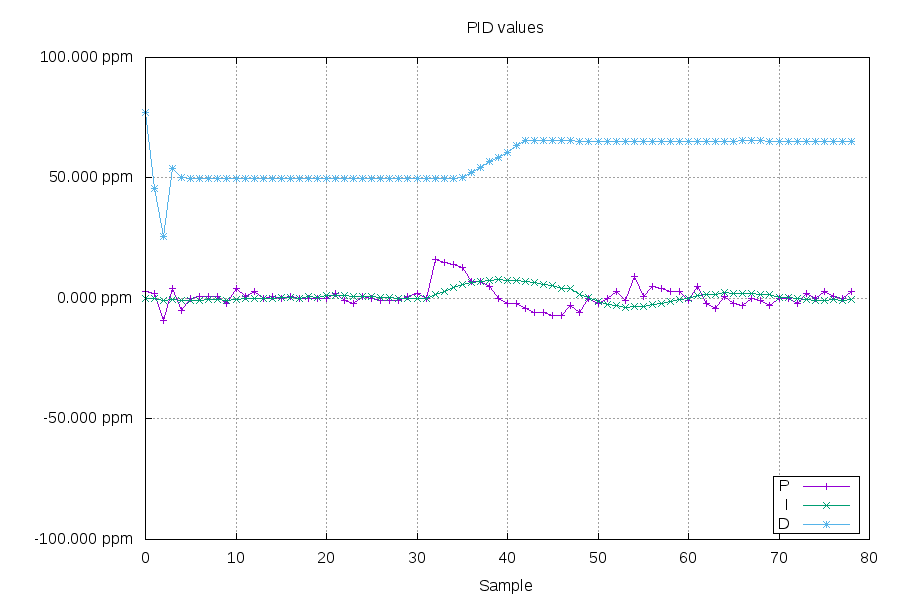 Comparing the local clock error to a nearby raspberry PI's MCP9808 temperature probe: 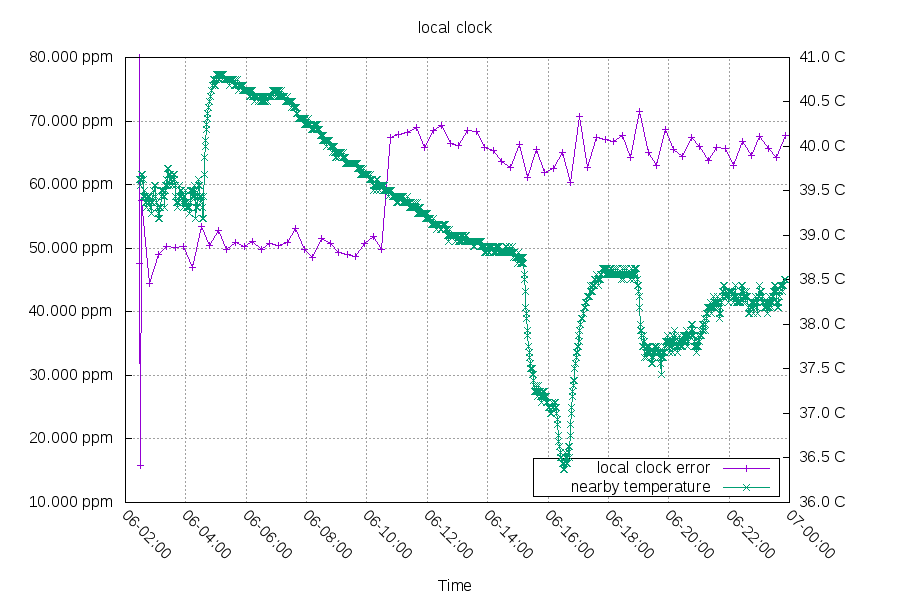 Maybe a rapid temperature change wasn't the source of this? Odd!

The fourth test was interrupted by needing to mess with my data logging computer's storage setup. I wanted to let it run for a week and see how that did. 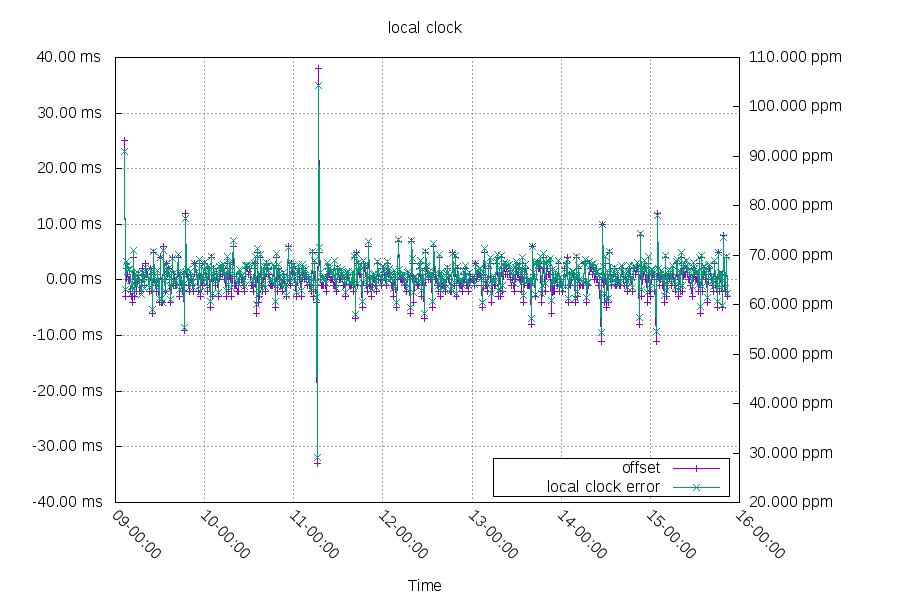 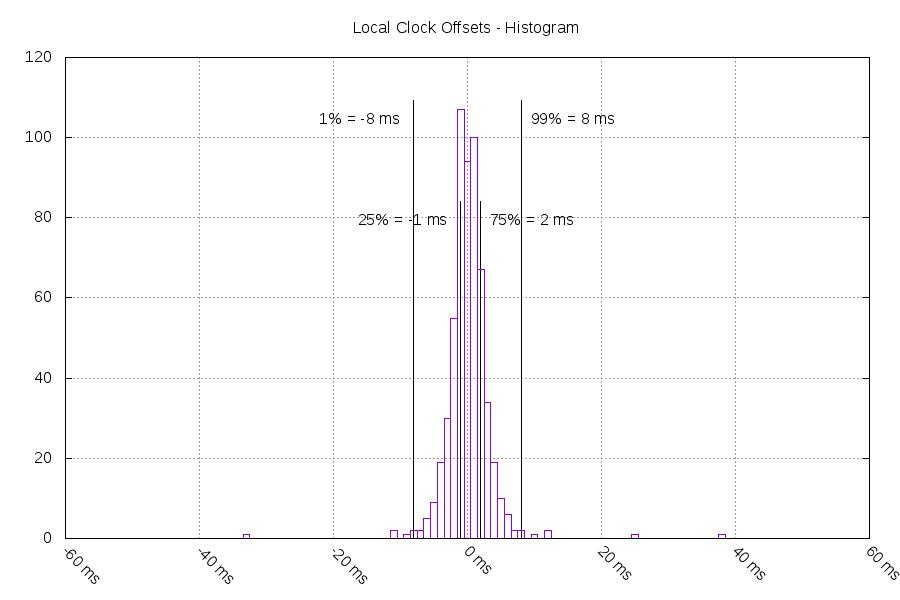 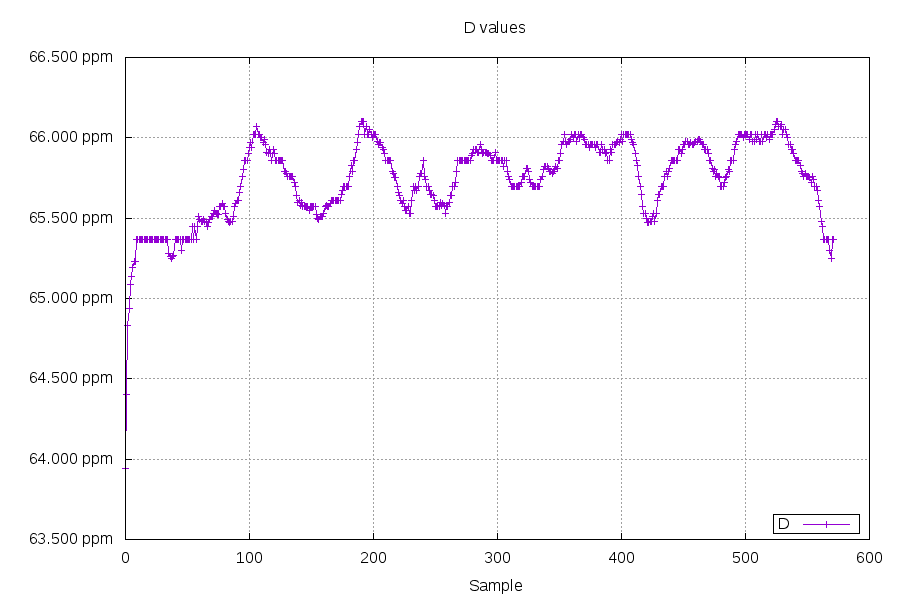 The local clock's offset frequently jumps between -1 ms and +2 ms. This is probably due to three factors: network jitter of ~3ms, limited clock rate control (my control steps are around 5ppm wide at 66ppm), and other measurement/rounding errors.

I've reached my original goal of a local clock within +/-10 ms. I've tested it in a few different configurations and I'm feeling pretty confident about its performance. Now to focus on more features!

I installed the Fedora ARM Server image on a Utilite Standard [http://utilite-computer.com/web/utilite-models] (which is based on a dual-core Freescale iMX6 1GHz). Not everything is working, but these are my

This is an update on my binary clock project. Click here for the previous post [https://blog.dan.drown.org/binary-clock/] I've been working on a PID controller [https://en.wikipedia.org/wiki/