For keeping your system clock on time, you can't beat the Pulse Per Second (PPS) signals available from $10 GPS modules. They typically have better than 100 nanosecond accuracy. GPIO PPS is one of the best ways to get that timing information into your system, but the hardware needed to use a GPIO PPS is not available on every platform. USB is available on almost every server, but by itself adds unpredictable latency to PPS timing information. This project aims to measure and compensate for USB latency to make it a decent PPS timing source for servers that can't use GPIO PPS sources.

This is the top part in the diagram: the time between when the USB device gets the PPS and when its interrupt handler is run.

This ended up being around 1.7us-1.8us on the USB device. This will take longer on systems with a full operating system.

This is the middle part of the diagram: the time between when the USB device buffers the PPS message and when the USB host picks it up on the next poll.

The USB Device's control interface bInterval is set to 1 (=1000us). This tells the USB host to poll the device's status every USB Frame. The majority of USB latency comes from this polling.

The measurement message is a simple text message sent as regular UART data.

Putting all this data together

After the host gets the measurement message, it has all the info it needs to calculate the difference between its time and the GPS's time. This difference is also called the offset. Below is a graph comparing GPIO PPS and USB PPS time sources on a Raspberry Pi 2 system. In an ideal world, these would both be flat lines at 0. Things are not ideal however. The USB PPS has a ~125us static offset which is possibly from the USB hub buffering the data. Static offsets are easy to deal with, so I removed it for this graph. I also tested on an Intel system, and the USB PPS had the same static offset. 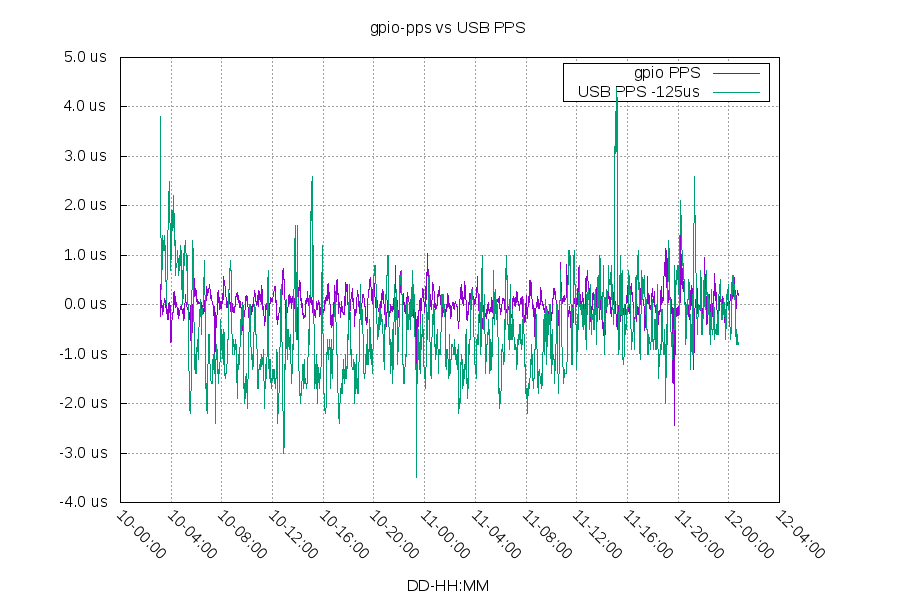 Graphing this data as a histogram of offsets, I would expect it to look somewhat like a Gaussian distribution.

The GPIO PPS is much closer to this than the USB PPS. This is another way to measure short term frequency stability.

Looking closer at the USB latency, you can see the PPS drifting relative to the host schedule of polling the USB device for its status. The system clock error was 2.215ppm during this time period, and this drift matches that error exactly. This probably means USB on this system shares the same clock as the system clock. This hardware is a Raspberry Pi 2, and I suspect it won't be true for other platforms. I also suspect the stability of the polling schedule can't be relied upon, as the host controls it and can reschedule it whenever it wants. 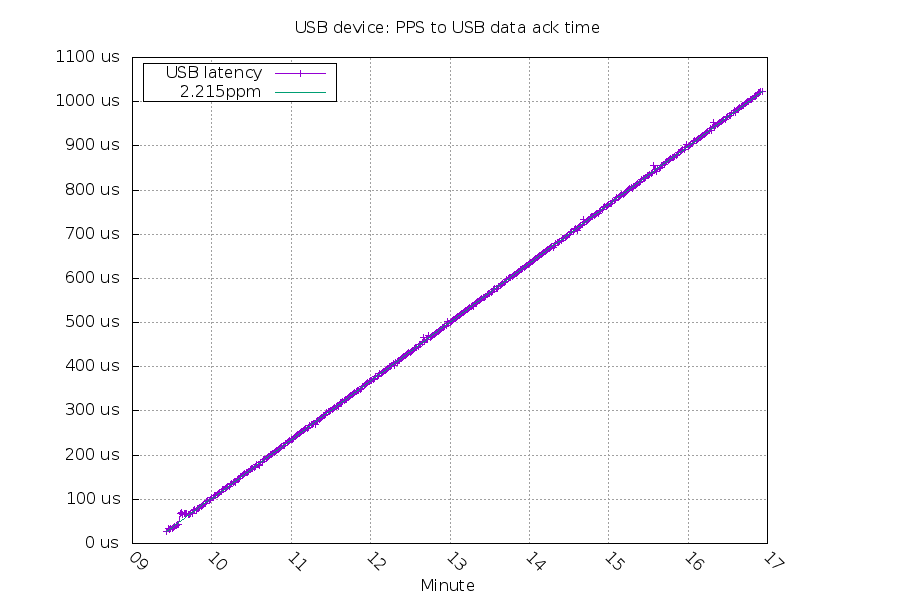 Extra: a breakdown of the pieces needed

The previous data I have on aging [https://blog.dan.drown.org/tcxo-rtc-hats-aging-rtc-frequency/] covered 10 days, and now I want to come back to this now that more time has passed. This data