After the previous tests, I ordered another GPS antenna to improve the signal conditions. 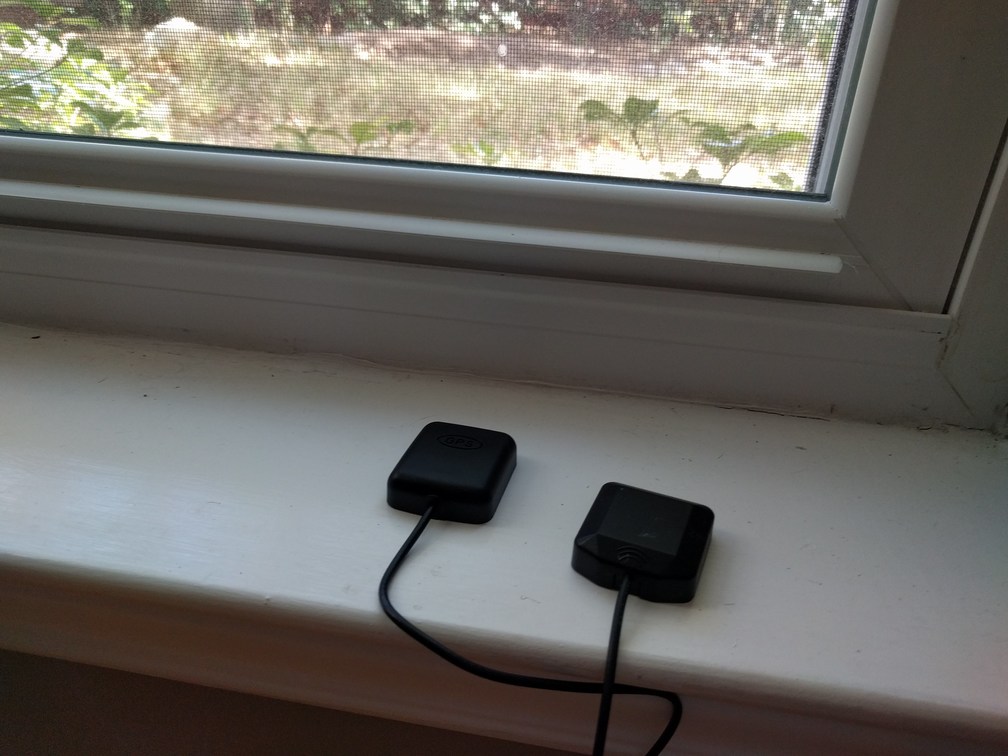 They're just the cheap puck style antennas with SMA connectors ($10 on Amazon), and I've put them on my windowsill.

There's something wrong with my NS-T, either I've messed up the configuration or something else is wrong with it. I tried resetting it to factory defaults and changing the PPS settings. Sometimes the NS-T would work well, for example the half-hour below. 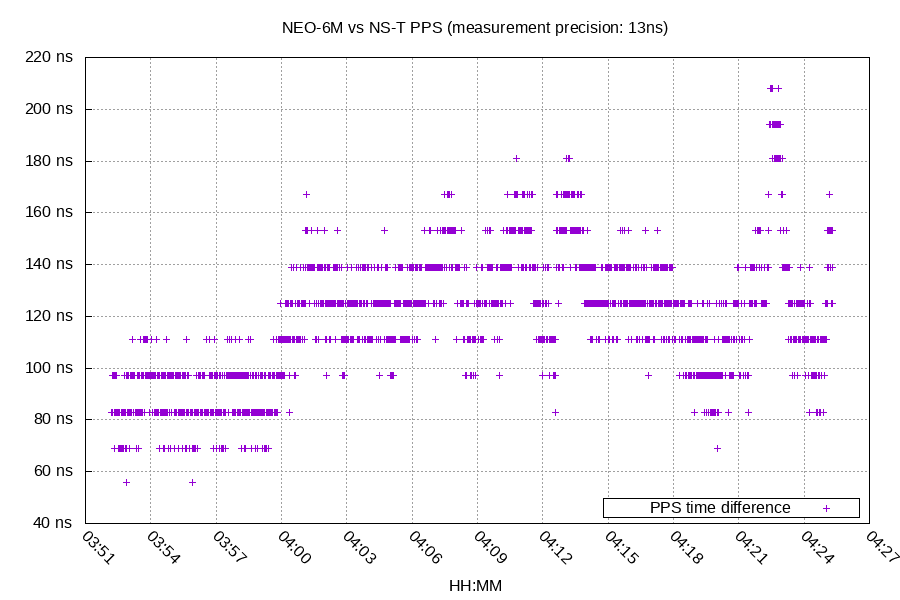 Other times, it would jump around a lot more than I would expect. 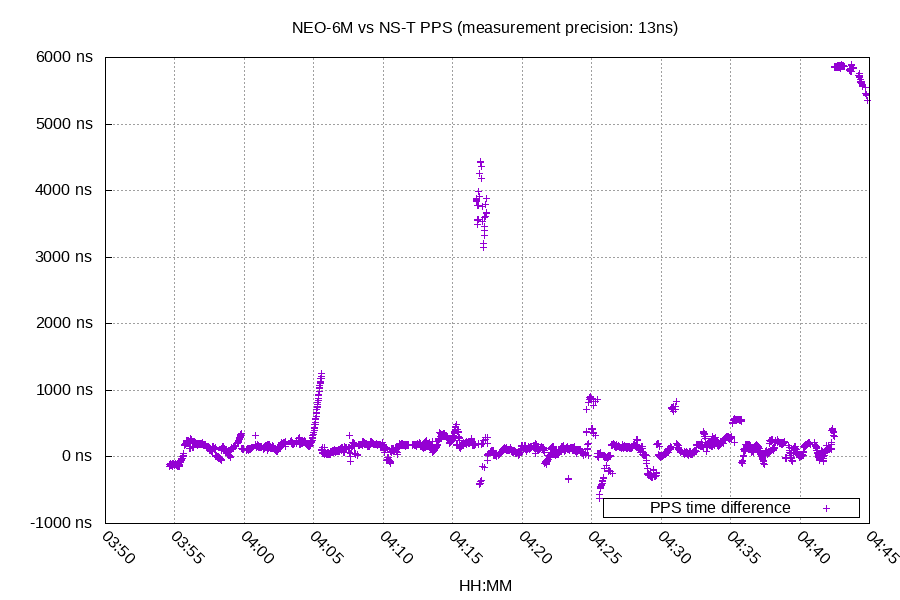 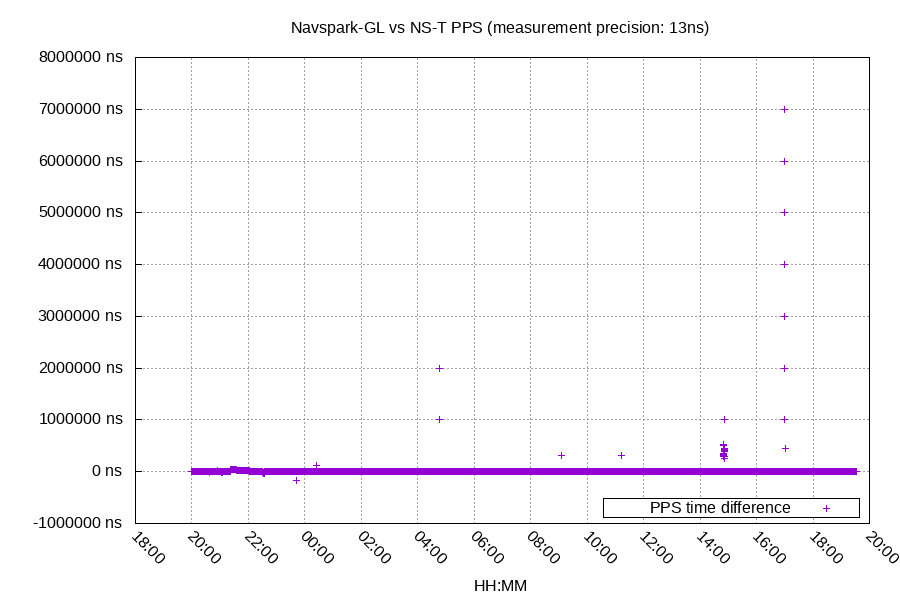 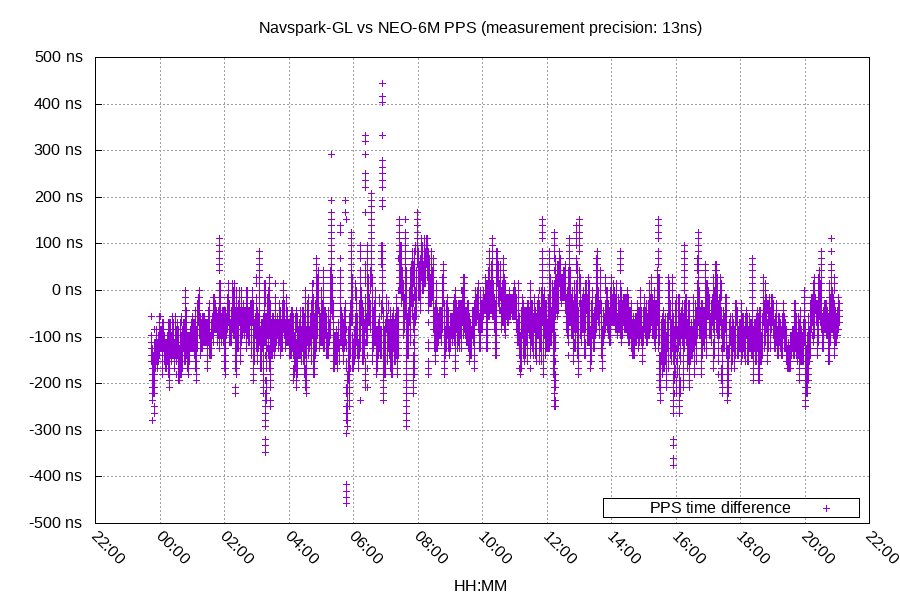 This is a pretty good result. I changed the antenna delay compensation on the NEO-6M at 01:09 UTC from 50ns to 0ns, but that didn't seem to make any difference. Swapping antennas and swapping timer channels didn't have a noticeable effect. The NEO-6M is ahead of both the Navspark-GL and the NS-T by 72ns on average.

You can also see the difference in signal strength through their vendor supplied interfaces: 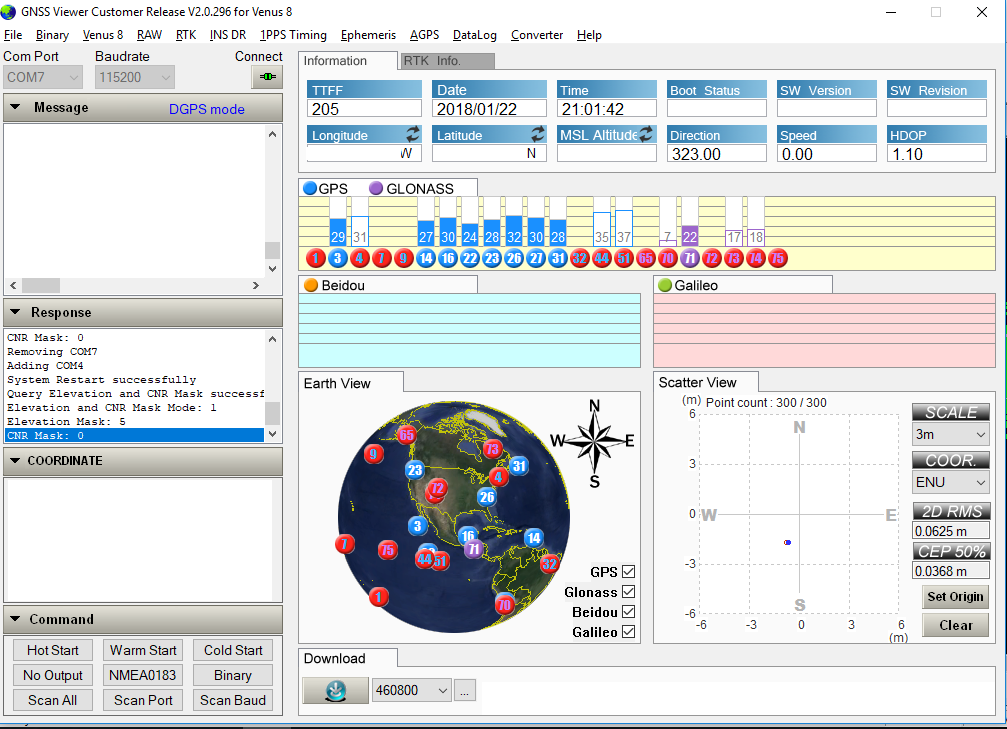 The u-center application is very nice, however. In the screenshot above, you can see both the per-satellite detail (left panel) and the average SNR over time (right panel). This is the NAV-SVINFO UBX message and is not enabled by default.

The SVINFO fields are defined in the "u-blox 6 Receiver Description" PDF. To make this information easier to find, the columns are as follows:

This data is from the NAV-CLOCK UBX message. It is showing the GPS module's frequency error on the left in us/s (which is also ppm). It is showing the time offset of the GPS module's internal clock on the right, which happens to have a slope of around -1.8 ppm. Before the GPS module's first lock, both of these graphs swing wildly while it tries to estimate the local clock. I've been trying to speed up the process by using the AID-INI UBX message after starting the module and giving it the last clock drift value with a clock drift accuracy of 1ppm. It still takes 10 minutes+ for the initial lock, even with u-center's online data assistance. I want to test one of u-blox's TCXO based modules to see if that improves this at all.  See part 3 for those tests.

What is the goal? I have a weather station with a wireless temperature/humidity sensor. Instead of looking at the LCD on the wall, I'd like to have that data on my phone.

Starting point I got a u-blox NEO-6M and I wanted to compare it to my NS-T. Since I don't have a frequency counter, I decided to try creating one myself. The hardware I