I have an SB6183 cable modem, and it's been dropping my IPv6 traffic. It only seems to affect TCP packets with the timestamp option set. To get some data on what's happening, I added the ability to set the TCP options in nping. 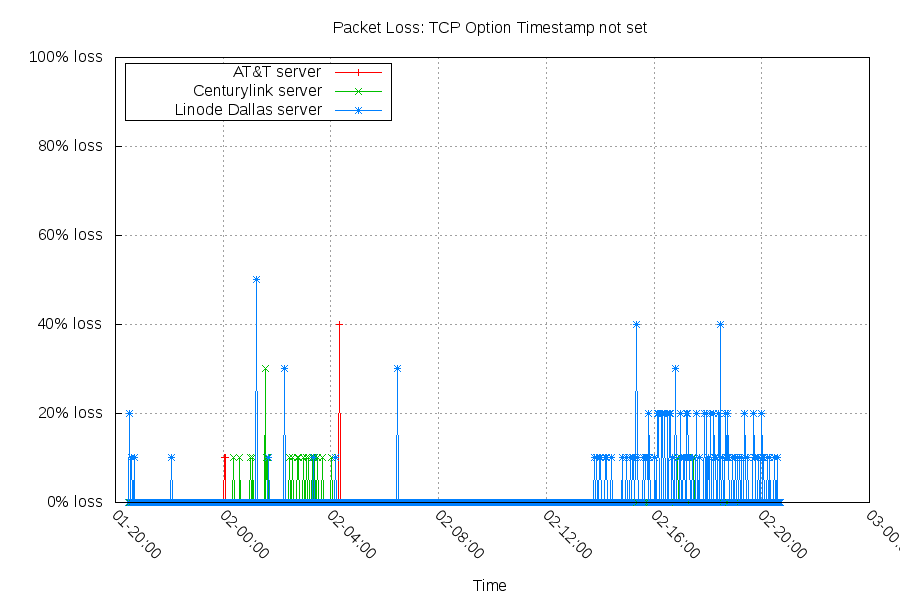 At the same time, TCP packets with timestamps were sent to the same destination. 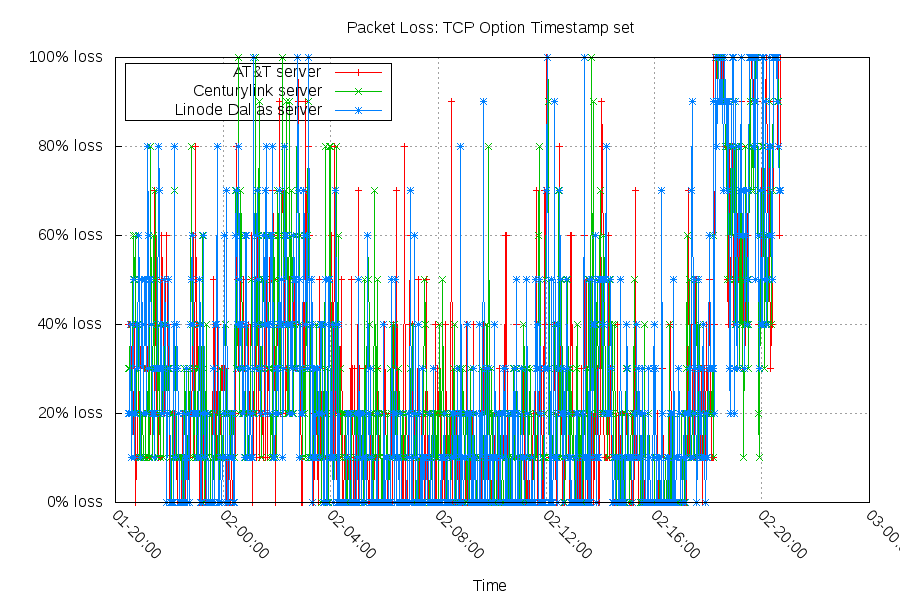 A incrementing timestamp value was used to make it easier to match up the lost packets on the server side. Comparing packet loss by running tcpdump on both sides for a few minutes, it was all in the transmit direction (from my home network out the cable modem) rather than the response (from the cable modem into my home network).

On average, there was around 21%-25% packet loss. But you can see the amount of loss doesn't look random at all, it looks like there's some correlation with the time of day. This sucks when each SYN packet lost adds at least 1 second delay. Happy eyeballs can hide this for web browsers, but not everything has happy eyeballs enabled. This also sucks for web applications who tie your session to your IP address (which is a problem for other reasons too)

Looking closer at the TCP options, the modem is actually rewriting them. For example:

It's changing both the window and the window scaling. If you've ever seen the message Peer X unexpectedly shrunk window Y (repaired) in Linux's dmesg (I think it was removed somewhere in 2.6.x), it might have been a cable modem rewriting the window scale without telling the endpoints. This would result in the window closing 2x faster than expected.

The modem also seems to be rewriting syn-ack packet responses:

This rewriting of windows bug is annoying in principal, but should be benign. TCP will think its windows are bigger, and will probably lead to more retransmissions but it'll mostly "work".

The rewriting of the TCP window and wscale happens on both IPv6 and IPv4. Oddly, the timestamp bug doesn't hit IPv4 traffic, only IPv6.

Credit should go to this thread on DSLReports for finding this issue first. It seems to be a problem with the Broadcom firmware on the SB6183 (chipset: BCM3383D). Comcast is pushing out the update in stages, and Time Warner Cable is working with Arris on an updated Firmware.

To test very long tcp options, I used the MD5 signature option (rfc2385) because it is 18 bytes long.

The modem did not rewrite this packet, and there was no packet loss.

Next up, TCP Option 253 is reserved for experiments, so I sent one 10 bytes long to match the size of the timestamp option.

This also was not rewritten, and there was no packet loss.

So it was rewritten, but still had no packet loss.

Next, I played with setting different wscale and window values. When it rewrote the packets, the modem would always add around 1400 bytes to the window value in the header and add 1 to the wscale value.

Oops, it wraps to 0. Still, this specific bug probably won't get triggered as window scale sizes over 14 are considered invalid in rfc7323.

They've considered what happens at max window size at least:

That last one is interesting because not only did it leave the window size the same, it also didn't change either of the two TCP options.

With the TCPOPTSTRIP workaround applied:

This makes it through without the window scale rewrite, and does not experience packet loss.

Color Changing Christmas Lights I like the idea of a string of lights controlled by wifi. It's an internet of lights (IoL)! Other people's projects Other people have created neat things with related

I worked on detecting the timing information from the WWVB signal. Being able to locate the start of the second is important because it is the clock the data is encoded against. I